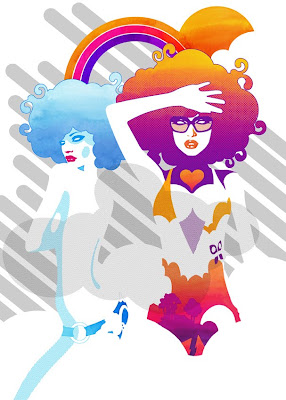 Interview by smoky man and Valentina Serra. Completed in June 2009.

What do you think about the “massification” of eroticism and the gratuitous display of the female body in fields very distant from Arts?
I have mentioned these issues in the above answer, but I guess I have a mix of feelings about it.
On one side I am all for everybody hanging up their guilty feelings around sexual imagery. People do find sexual imagery a turn on, so I like that we are starting to accept that.
However I think the 'massification' as you put it, is quite shallow and cynical. The bottom line is it makes money, I think more so that exploiting women involved in it on whatever level, it exploits us all in a consumerist way.
It uses our human desire to make money, whether in a music video, a perfume advert or a porn movie. But you can say that of our 'western' consumerist society anyway, the whole of the modern worlds economy is basically built on desire, is it not? most of us want to own nicer things, have a nicer house, eat tastier food, make love to the person you think is most attractive - its all about wanting (desire) and a huge percentage of media is now devoted to exploiting out wants to make money. Sexual imagery is just the most obvious and gratuitous manifestation of this.

The “line” has a key role in your art. It’s clear that you absorbed the lesson of Masters such as Aubrey Beardsley and Erté. At the same time, there are Sixties recalls in your subjects and in their sensuality such as Barbarella creator’s Jean Claude Forest or 007 Bond’s girls… The colour seems to show affinities to the Eighties. What’s about your studies and formative years? How did you develop such a variety of references?
That’s a hard question to answer. I think the simple way is to say that I love images. Whatever area, fine art, Photography decorative art, fantasy art, ancient art.
I am fascinated by the capturing of energy and ideas in an image.
So I look at a lot of things, I have a lot of books of all sorts of stuff. I think it's vitally important to have a broad and deep sphere of influences. It worries me that I see both students and illustrators looking in a very singular direction at contemporary illustration. As it has grown over the past decade there are more and more books and websites to reference and people make the mistake of thinking that because one persons style is popular that they ought to emulate it in order to be successful and get work.
I think this is a lack of proper education and a lack of imagination. I say to all my students and to all aspiring illustrators out there: "stop looking at contemporary illustration, go out and buy books from second hand stores, look at images that are hundreds of years old, images that are 20 years old, images that were made by people in another part of the world, maybe for a spiritual reason, soak it all up and be inspired, and make work that you care about that says what you have to say, not what you think will make you money".

Modern Art has showed that what is Kitsch or Camp is not necessary ugly or “bad taste”. Which is your link with the concept of Kitsch?
Kitsch... It can be used well, or it can be purely indulgent. I think used well, to make a comment it is valid. I think it does enter into my work on some levels, but only if it had a good reason to be there. I think certain pieces of my work like 'Bad Bambi' use it and comment on it at the same time.
I think Kitsch is very close to nostalgia which I use sometimes to a small degree, like in the 'Pornogothic' series using gothic horror books movie themes to comment on sexual clichés.

Nowadays it’s not uncommon to see artists from comics or illustration working for fashion companies. You collaborated with Gucci but also for Adidas and Nike. And, sure you designed a cool sold-out bikini collection, JG4B. What can you tell us about these works?
Well not much really! The work for Gucci didn't ever actually go to press. They asked me to design a set of playing cards for them. But what I did was too edgy/modern for them, I toned things down but in the end they were just too conservative a brand to go with it and they backed out of the project!
Nike and Addidas was very much advertising, not really collaboration on fashion wear.
And JG4B lots of people love it, we make very individual bikinis. All the print is designed by me, and most is placement printed on the bikini - not a repeat pattern. They are fun, cool, different to most of the boring swimwear out there. But getting a fashion brand of the ground is very hard, we are hoping to have a new collection out next year, but things are very much in the balance right now.

Can you talk about your processes? What kind of material do you use? What’s about the starting point of an idea?
The starting point is almost always writing. I make lists. I don't really sketch much. I look at books with an idea in mind and sometimes that makes my idea change or re-form.
Then I sometimes make photo-collages on the computer from lots and lots of reference images I have collected. Then I print these out and re-draw them then scan them back in and trace them with at path. I draw some stuff in Illustrator, some in photoshop, some by hand some on the mac.
I take photographs of textures sometimes and use them in the. Obviously for the poster girl series I had large prints and one acrylic cutout made and shot them in a studio with a model. So my process is very eclectic. But always uses the computer as the central point of a number of ways of working.

You are a Brit and considering how old you are, I am curious to know if you were in any way influenced by the growing new wave of British comics like 2000 AD, Judge Dredd, Tank Girl…?
Yes I think I was, I loved 2000 ad. I think Simon Bisley's ACB warriors and Slaine was the best.

What’s about your ultimate dream project?
A show in New York? I'd love to use my creativity in other ways - collaborate on a film maybe?
I went to Paris recently and went to the Crazy Horse cabaret show there. It would be cool to work on branding for them or even a new act in the show - I liked how inventive it was - not just stripping!
Really I think I want to be selling my prints and starting to make original pieces and move in a more gallery oriented direction. If I can be lucky enough to keep producing work that people like and want to own I'll be every happy... thats the long term aim!
Posted by smoky man at 12:39 No comments: 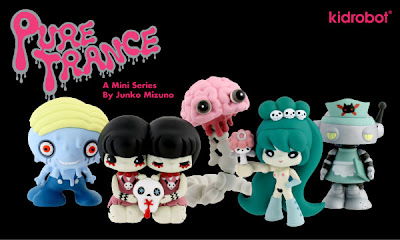 Interview by smoky man. Completed in May 2009.


What do you think about the scene of art toys and collectable vinyls? When and how did you start? What's your current involvement?
I'm just surprised at how the scene has grown so big.
I started designing toys in 2002 by request of a Japanese toy company Art Storm. As for current involvement, some characters from my graphic novel Pure Trance will be released as a series of mini figures from Kidrobot in June [2009. Editor's note: The figures are sold out now.].

In the past you worked for important art toys companies like Toy2r and Kidrobot. What can you tell us about those experiences?
It's been challenging for me. At first, I was nervous as it seemed to be very difficult to work on 3D objects with people who I can't meet and communicate in person like I used to do with Japanese companies. But they were very professional and I'm happy with the products I made with them. There are a lot to learn from them and it's been a rewarding experience.

Do you think that toys are a good way to express your Art vision or what? I mean, in respect to comics and illustration...
That's a difficult question as I'm doing it just because it's fun...
What I like about a toy is that it has a different impression from 2D work. It feels fresh and inspiring to see my characters in 3D.

Also, which you consider the best toy you created or the one you are most attached to?
It's too hard to choose. They are all my babies.

You created and still create toys. I am curious to know are you a collector too? And if you are (and I am pretty sure you are or at least you had been one), what do you collect?
I used be a collector of girl's toys from 60's to 80's but I've slowed down now...
I have no more room in my place. I still like going to check toy stores and toy events for inspiration, though.

Recently you have started a collaboration with Japanese company "GARDEN" creating a new line of products under the label Mizuno Garden. The concept says: Mizuno Garden is a paradise of erotic fantasy where the fruits of love are always ripe. The crops include beautiful lingerie, costumes, condoms, lotions, vibrators, and more!” Till now you created the gorgeous package for condoms and lotions, but I suppose there are plans for some toys. Can you reveal anything about it?
We've been planning to do some massagers, lingerie and costumes but the project is going very slowly due to both my and their schedules. So unfortunately, there's nothing I can reveal to you at this point...