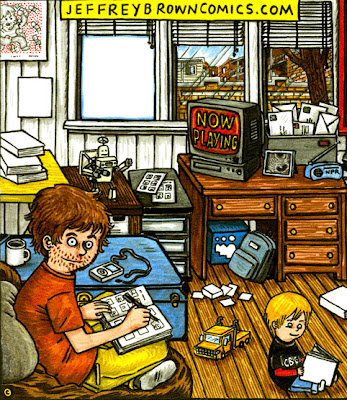 Hi Jeffrey. Your comics have not been published in Italy yet. Do you want to introduce yourself to our readers?
After giving up my pursuit to become a fine artist, I've been drawing comics for not quite seven years now. I started off drawing autobiographical stories, but have since expanded into more humorous and parody comics. My autobiographical comics are known for being bittersweet and scratchily drawn, with a bit of focus on relationships, although that's changed.

How long have you been involved with making comics? How did you first start?
I grew up reading and drawing comics, but by the time I entered college I had stopped. It wasn't until I entered art school in pursuit of my MFA that I realized the art world didn't appeal to me as much as the comics world did. I began drawing comics trying to recapture the joy of drawing I had when I was a kid, and at the same time make art that was a more direct expression of human experience than much of what I saw being made around me at around school.

I read that your influences were very varied, from X-Men to indie comics. How did you develop your style, both as a writer and an artist?
Growing up I was a big Arthur Adams fan and maybe tried to mimic his style, and later fell in love with the comics of Moebius and he became a clear influence. After I stopped reading comics in college, my artistic influences were more fine art related, especially expressionism, and artists like Charlotte Salomon, followed later by more contemporary artists like Pettibon and David Shrigley. When I started reading comics again, my main influences were probably Chris Ware, Dan Clowes, Julie Doucet and Chester Brown, in terms of the actual comics making process if not in specific visual terms. In many ways my style has developed as both a response to other things as well as primarily a mode of communicating my own ideas and feelings in the most direct way I can.

A few years ago, someone with a graphic style such as yours would have struggled to gain acceptance. Did you ever feel frustrated by people not understanding where you were coming from? Was it easy for you to find a publisher?
I began by self-publishing, after all of the indie comics publishers had rejected my first book Clumsy, mostly because they all felt Clumsy didn't have a style that would sell well enough for them to afford the risk of publishing it. After I self-published and it was pretty well received, Top Shelf offered to take over publishing my work, although they had already been distributing the self-published version. Even now there are a lot of people who seem to dislike the style, and sometimes that's frustrating, but I try to keep in mind  that not everyone will like everything. I think my style comes from a background of art and poetry, whereas many comics readers in America have a bias in favor of highly rendered or very stylized imagery.

Your books are mostly autobiographic. What are the reasons for such a choice and the biggest challenges in tackling autobiographic comics?
The choice began just as a way to make a direct counterpoint to the fine art I saw that had nothing to say about any human experience - art that seemed to be so much about conceptual ideas and incestuous in that it only referred to art, and just stayed inside itself. So I wanted to make something as real and honest as possible. Why I've kept up with the autobiography is hard to say. It became a kind of compulsion and I've got a certain amount of stories left that I'd like to tell and then I think I'll be ready to move on to something else. 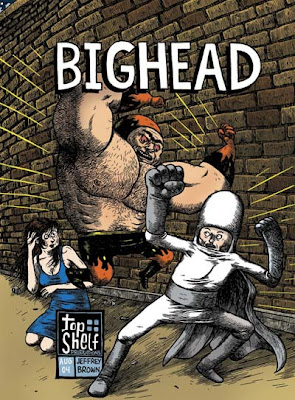 You also display a big love for the superhero genre, and this is not very common about indie artists. What did you want to bring to the table with Bighead?
Bighead was about bringing fun back to superheroes, and about unbridled love of the comics I read as a kid. I wanted to bring a sense of joy and wonder to superheroes, which now often feel the need to be overly serious, and everything needs to be explained away.

Let’s talk about Clumsy and the other books that form the Girlfriend trilogy. When did the idea of a trilogy come about?
Trilogies are nice, I've always liked them. The first book wasn't even started with the intent of being just about the relationship, but that's how it flowed as I wrote it. The second book was about losing my virginity, which was a subject I'd wanted to tackle in my art for a while, but didn't know how. After those two books, the third was a way of questioning how intimate my relationship was there, as well as making a parallel to people reading my books and how well they really knew me. After those three I created Every Girl Is The End Of The World For Me as a kind of epilogue, to put an end to the relationship focused work.

To be honest with you, I was both amazed and frightened by how brutally honest you were in Clumsy. How did you approach the comic and did you ever feel uneasy with such an open depiction of yourself?
When I was drawing that book I was still in the fine art midset - the book is drawn all in one blank sketchbook so that the sketchbook itself would be the 'comic book.' So I never really imagined that as many people would really be delving into it as they have. There's also a sense that because I'm being so brutally honest, it's hard to be too critical. Two things that have always surprised me are that people rarely question how truthful I am in the book, and that criticism often has to do with my character as a person rather than the form of the book or even that character within the context of the book.

After Clumsy, you put out Be A Man, a sort of Clumsy parody. Why did you feel the need to do that? Was it a dig to superficial comic fans or the result of the need to avoid been characterized?
I thought it was funny, that people had these strong reactions to my character in Clumsy, and people had these very big ideas about manliness apparently, so I wrote out the original version of Be A Man in a couple days in my sketchbook and did a small print run of minicomics. People really loved it though, so I redrew and expanded it. Part of me probably does want to take this easy route to show that I'm more complex and not so one dimensional as Clumsy shows, and part of me probably just enjoyed making some jokes.

After completing your Girlfriend trilogy, what are your plans for future comics? What are your current projects?
I've got a few more autobiographical comics planned, some children's books maybe, and a quarterly series of small books with Top Shelf that will showcase more Bighead stories and the like, mostly humorous fiction and parody type work. The book I'm working on right now is called 'Funny Misshapen Body' and is about high school through art school, kind of a memoir of becoming an artist.

At the moment, in Italy there is a big debate about the graphic novel form and about graphic novels vs serial comics. What is your take on the subject (given that you have worked mainly on the graphic novel format)? Would you be interested in approaching serial comics? What about mainstream gigs?
I've thought about the serial form, and I enjoy reading them in many cases, but for my own work I prefer making books. I think what Chris Ware does - where the serialization itself is in book form - is a nice way to do things, and I'm surprised more people haven't already moved in that direction. I think the debate, which happens here also, is rather silly. Certainly, it's stupid to be militant about keeping your pamphlet comics when the market itself can't support them. And in any case, prose novels used to be serialised in magazines all the time, and no one seems to have a problem now that novels come out all at once. Some stories the serial format works well, so I'd hope that people would want what's best for the story, be it reading it in segments or all at once. As for mainstream gigs, I'd still like to achieve my childhood dream of drawing a Marvel comic someday, so maybe there will be an opportunity for that that comes up at some point.

Speaking with other American creators, they seem to have the perception of European comics as very artsy and creative. What about you? Are you in touch with the European comics scene? Do you know anything about Italian comics at all?
I'm a little in touch, from visiting Angouleme and some of the European comics festivals. I think some of the creators here focus on those artsy creative books and don't realize how much genre work there is in European comics. Most of my knowledge comes from what's been widely available here - Milo Manera, of course, and some of the other artists from Heavy Metal. I like Gipi's work and am glad to see it being well received here. And I know the anthology Canicola, which I've enjoyed reading a few issues of, after meeting Amanda Vähämäki, although she's from Finland originally.

Do you still read comics? What do you like?
I read everything I can. Ware, Clowes, Chester Brown and Julie Doucet remain among my favorites, and I read probably 85-90% of everything Drawn&Quarterly, TopShelf and Fantagraphics put out, as well as whatever other indie comics look interesting. I've started reading some mainstream comics again, mostly whatever Grant Morrison is writing lately.