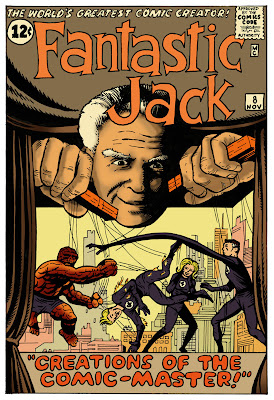 In 2004 Gary Spencer Millidge contributed - with other Italian and International artists - to the Italian book Jack Kirby: Tributo al Re, conceived and supervised by Italian journalist and comics writer Marco Rizzo.
The sold-out anthology celebrated the genius of Jack Kirby in the 10th anniversary of his departure with short essays, appreciation texts, illustrations, short comics and much more. I contributed with a short text and also involved some International friends in the homage gallery.
In that occasion Gary Spencer Millidge drew a great illustration celebrating both Kirby and one of his most popular creations, The Fantastic Four.

Many thanks to Gary for his generous support to the book and... for his permission to post here his great illustration in colour for the first time. Enjoy! :)
Posted by smoky man at 12:06 No comments: