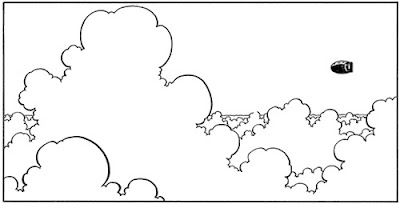 At the end of 2006 - in the occasion of its 20th anniversary - I edited an Italian Watchmen tribute book which was basically a collection of 12 brand new essays by well known comics experts analyzing Alan Moore & Dave Gibbons masterpiece. The volume was published by Lavieri, a small Italian publisher, with all net profits donated to AIMA, the Italian Alzheimer organization.
Popular comics writer and novelist Mike Carey wrote the afterword and now, for the first time, he gives his permission to show here the original English version. Enjoy! And thanks to Mr. Carey of course!

Meanwhile, Up on a Huge Hill
by Mike Carey

Sometime around the Easter of 1987, I was coming back down to London from Liverpool in a National Express coach, and I stopped into that comic shop just off Lime Street, a few doors up from the Legs of Man pub – you know the one, yeah? – to buy something to read for the journey. A lot of people had been talking to me about Watchmen, so that’s what I bought – the first six issues, all at once. It was, in some ways, an irrevocable step.

Two decades on, the central metaphors of Watchmen continue to ricochet around inside my head, hitting the other objects that are piled up in there and setting them off in turn in a sort of perpetual chain of Brownian motion. There’s no help for it: that’s what great art in any medium does. You just have to learn to live with the constant feeling of slight vertigo that it brings about, and not drive or operate heavy machinery while under the influence.

Quis custodiet ipsos custodes? Who will watch the watchmen? Well that’s what we all want to know right now, perhaps even more urgently in the age of Bush and Blair than in the days of Thatcher and Reagan. It’s a question that never goes out of fashion, more’s the bloody pity.

But I said metaphor, not allegory. Watchmen isn’t the sort of book that opens with a key, and turns out to have been talking about one particular thing all along, under the light disguises of fantasy. It resonates on every level, from the psychological to the mythic by way of the political. It has meanings but no morals. It refuses consolation both to the new frontiersman Rorschach and the utopian dreamer Ozymandias.

Perhaps that’s why it’s aged so well. It’s a trite truth that nothing dates faster than the topical, and nothing is more topical than the timeless. By cutting itself loose from any real world context, and yet at the same time tying itself so precisely to an era that could have/couldn’t have/could have happened, Watchmen has the best of both worlds: the acerbic accuracy of social commentary, and the endless, effortless now of fairy stories and myth cycles.

In trying to sort out my feelings about the book after all this time, I find Terry Gilliam’s response to it a useful index to my own. Gilliam loved Watchmen – famously calling it “the War and Peace of comic books” – and for many years fully intended to make a movie version of it. It’s listed in Bob McCabe’s “Dark Knights and Holy Fools” as one of the “great unmade”. But in retrospect, Gilliam has no regrets about not making the film: he ended up feeling that the process of translation would strip out most of what made the book so valuable, and leave you with “just straight comic book heroes again.”

In the same way, earnest commentary runs the risk of strip-mining the dense intra-textuality of Watchmen – the way it comments on and modifies and inverts and undercuts its own narrative – and taking out of it a single, narrative thread with a single paraphraseable meaning. I think, as academic endeavours go, that would be the sort of project that King Canute would endorse.

Sometimes you just have the good fortune to set up your tent in the right place. It can be a complete accident – choosing a theme or a setting that turns out to be right in ways you couldn’t anticipate – or it can be the result of long and meticulous planning. Watchmen, I think, is an example of both. Some of the most haunting and successful aspects of its rich tapestry, like the playing on Einstein’s famous “watchmaker” quote and the agonising ironies of having a well-meaning psychiatrist trying to read meaning into Rorschach, were clearly always part of Alan Moore and Dave Gibbons’s many-dimensional game plan. Others, like the blood-stained smiley badge which became so resonant an icon, happened along the way and were incorporated and added their own unexpected richnesses to the whole.

And history, in its different way, does the same thing – adds layers of meaning to the text, and changes the way you respond to it. I don’t want to draw a comparison between Adrian Veidt’s grand design and the events of 9/11: there are good reasons for not going there. But I can’t help, now, when I’m re-reading the book, comparing the real and the fictional disasters, and measuring Veidt’s ambitions and his qualified success by the standards of a world which now has some vivid, recent examples of the public and official responses to immeasurable tragedy.

As we go through life, we look for guides and interpreters to help us turn its noise into signals – not because we believe that life has to make sense but because we can only bear so much ambiguity and pointlessness before we get sick. If you’re smart, you’ll avoid the snake-oil salesmen who’ll offer to explain the whole thing for you, sell you a map or give you precise directions. Trust the guys who look puzzled and worried themselves, and who don’t pretend to have all the answers: just some different routes through the questions that you can take for yourself and chew over at your leisure afterwards.

With Watchmen the more you keep coming back, the more those routes keep opening up and taking you away from the conclusions you expected to reach. As Donne said,

“On a huge hill,
Cragged and steep, Truth stands, and he that will
Reach her, about must and about must go.”

Yeah. I couldn’t have put it better myself. But Moore and Gibbons could, and did.

[this article is copyright Mike Carey. All rights reserved. Published here with the author's permission.]