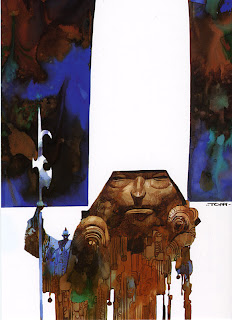 Originally printed in Studio Space, a book about comics artists in their studio by Joel Meadows and Gary Marshall published by Image Comics in 2008.
In his review CBR columnist Augie De Blieck Jr. wrote: "Hey, it's not like you're going to read too many interviews with Sergio Toppi anywhere else. That was a pleasant surprise in the book."

Sergio Toppi continues to be a maestro of the comic form, consistently producing artwork for the most influential Italian publications and publishers. Rightly considered to be one of the finest European comics artists working today, where Toppi succeeds more than most is in making the impossible look easy. Exhibited around the globe, Toppi has drawn a loyal following, and is hugely admired by his peers, claiming the likes of Jim Lee, Walter Simonson, Chris Weston, Daniel Zezelj and Frank Miller amongst his many fans…


Getting Started
I began my career while I was still attending high school in the early Fifties. I did some illustrations for an encyclopaedia aimed at a young audience, published by Mondadori, an important Italian publishing house. I continued with illustration throughout the ‘50s and early sixties, working for the UTET, Italy’s oldest publishing house, and as an animator working on various advertising campaigns for Pagot animation. The comics would come much later.
It wasn’t until the mid-Sixties that I actually began to draw comics professionally. I drew Il Mago Zurlì (The Zurli Wizard) which was followed by a biography of Pietro Micca, the hero of the siege of Turin, in Il Corriere dei Piccoli. So I found myself drawing primarily historical comics, lots of war stories, with writer Milo Milani. This formed the series Grandi Avventure di Pace e di Guerra, even though, like much of my work it was really a collection of “one-off” stories. If I’m going to draw a series rather than a single story, then I do prefer to be the writer, which is how Sharaz-de and Il Collezionista came about, as well as the numerous stories that have appeared in the Corto Maltese magazine over the years.
My style is often described as unique, but I have been drawing for a long time now, so the influences come from everywhere.

It’s important to look around and be aware of what’s happening. But the main thing is to find a personal voice. When you work in comics, in any artistic field, the most difficult thing is researching for a personal style. Which way you’ll find it, I don’t know. There is no formula. It happens. It’s natural to look at other comic artists, the ones you like. But you have to avoid repeating things already done. Here in Italy, I like the work of Angelo Stano, Nicola Mari, Lorenzo Mattotti and Sergio Zaniboni. From further afield I enjoy Daniel Zezelj who did many works in Italy too, and André Juillard, a French artist. Also I really like Enrique Brecchia, who, like his father Alberto, is a great artist. But I am sure I am forgetting many others.


I watch many movies. Even in a minor production it’s possible to find an interesting sequence, a good shot, different kinds of shots, so that each and every frame could be very useful. From a technical point of view, I think that for a comic artist, cinema can have a big influence. A cinematographic drawing style is very important, it’s useful to capture the figure in motion. I also find the period between the end of the 19th century and the beginning of the 20th century to be very exciting with regards to the creativity amongst the ‘fine artist.’ I like Schiele and Klimt, all the artists from the Secession movement, even the minor ones, I think are extraordinary. It was the time of applied arts and even a napkin could become an art object. They were great ‘craftsmen’ able to work in many different artistic fields. 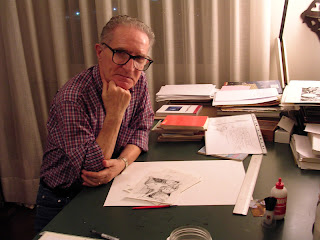